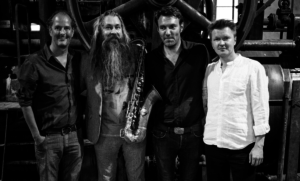 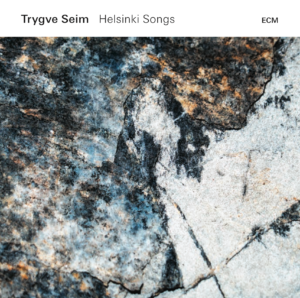 With its overt lyricism, strong themes and a sense of perpetual melodic invention, Norwegian saxophonist Trygve Seim’s new album quickly identifies itself as a classic-in-the-making. Themes of dedication run through Seim’s Helsinki Songsalbum, a set of tunes composed – for the most part – in the Finnish capital, and radiating tributes in many directions. Here are songs referencing Igor Stravinsky and Jimmy Webb, pieces dedicated to each of Seim’s gifted bandmates, and tunes that tip the hat, obliquely, to Ornette Coleman and Bill Evans. The quartet plays superbly throughout, with outstanding solos from leader Seim and pianist Kristjan Randalu. Helsinki Songs was recorded in Oslo’s Rainbow Studio in January 2018 and produced by Manfred Eicher.

Norwegian saxophonist Trygve Seim’s eighth ECM album as a leader or co-leader, Helsinki Songs, reaches out to the listener, tugging the ear with its overt lyricism, ethereal atmosphere and air of sustained melodic invention, often with hints of the East. Seim wrote most of Helsinki Songs on sojourns in the Finnish capital, in an apartment with “a composer’s aura.” Back in Oslo, he brought the compositions to life at Rainbow Studio with his simpatico quartet featuring Estonian pianist Kristjan Randalu, Norwegian bassist Mats Eilertsen and Finnish drummer Markku Ounaskari. Themes of dedication and tribute run throughout the new album, including pieces referencing Ornette Coleman and Jimmy Webb, as well as tunes dedicated to Seim’s children and bandmates.

It was with his ECM leader debut, Different Rivers, that Seim made an immediate impact on the jazz scene, with the disc winning the Preis der Deutschen Schallplattenkritik as Album of the Year in 2001. Since then, the saxophonist has been heard on more than 20 ECM releases, including Sangam with his large ensemble, on multiple albums with the collective The Source, in duos with accordionist Frode Halti and with pianist Andreas Utnem, and on recordings led by Manu Katché and Jacob Young. Recently, Seim has been heard as part of Eilertsen’s septet (Rubicon), with Iro Haarla and symphony orchestra (Ante Lucem) and with singer Sinikka Langeland and Trio Mediaeval (The Magical Forest). As a leader, Seim’s previous ECM release was Rumi Songs, the 2016 album featuring his settings of words by the titular Persian poet, the group including Haltli, cellist Svante Henryson and mezzo-soprano Tora Augestad. The Guardian praised that record as “playful, guileless, accessible,” singling out Seim’s playing for being full of “tonal and melodic surprises.”

A natural improviser, Seim ventured beyond early jazz playing to expand his palette via studies of Arabic music in Cairo; between 2005 and 2010, he collaborated often with Egyptian musician Fathy Salama. Seim has also explored Indian classical traditions, along with being inspired by Armenian duduk virtuoso Djivan Gasparyan – whose influence can be heard unmistakably in the emotive keening of “New Beginning” and “Sorrow March” onHelsinki Songs. In recent years, the saxophonist recognized certain kinships that these traditions – with their scales, modes and melodic arabesques – have with the folk music of his native Norway, even as he has returned to the format of the classic jazz quartet. “After the early ’90s, I was drawn to larger ensembles and small situations, like duos – perhaps unconsciously to avoid the jazz quartet, which has such a weight of history from Lester Young to John Coltrane and on and on,” Seim explains. “But now I’m surrounded in this quartet by players who enable me to really be myself.”

“Kristjan Randalu has technical skills that are beyond belief for me – he can do anything you need to be done at the piano,” the composer says. “But most important is that he can really make the piano sing, which is a rare thing. His touch is so beautiful that when you hear him play a chord, there are more than just those four or five notes in it. There’s soul.” About Eilertsen and Ounaskari, Seim adds: “Mats is such a creative bass player, with a wonderful sound. And Markku was inspired by Edward Vesala and his free, dramatic playing, though he can also play very simply. Mats and Markku also have this great connection with each other, something you can feel.”

The other dedications on Helsinki Songs include “Birthday Song,” which Seim wrote for Eilertsen. “For his 40th birthday, I got Mats a nice bottle of champagne and a Moleskine notebook for composing,” the saxophonist explains. “In that notebook, I wrote four melody notes and a chord – ‘here’s something to get you started,’ I said. Very early the next morning, after our celebrations, I came home a bit drunk and sat down at the piano, playing those four notes and the chord. I ended up ‘stealing’ them to write the rest of ‘Birthday Song’ before I went to sleep. The piece has some longing in it, like your 40th birthday can have.” Seim wrote the sweet-toned album opener “Sol’s Song” for his 7-year-old daughter and the Baroque-referencing “Ciaccona per Embrik” for his 9-year-old son, “although I actually wrote that tune when I first found out that I was going to be a father – when I felt emotions that were both fantastic and frightening, those feelings of a first-time parent.”

The melancholy “Katya’s Dream” was inspired by Seim’s viewing of Coco and Igor, a film about Stravinsky’s early years in Paris and his supposed relationship with Coco Chanel. Katya is the famed composer’s long-suffering first wife, who sacrificed her artistic dreams for those of her husband. When Seim first wrote “Morning Song,” the pianist Andreas Utnem noted hints in its opening to Jimmy Webb’s ballad “The Moon Is a Harsh Mistress.” Seim didn’t know that song as a Webb composition, having assumed it was an original by singer Radka Toneff, whose cover was iconic in Norway. Subsequently delving into Webb’s music, Seim became a fan of the American hitmaker – and gave a new coda to “Morning Song” directly inspired by Webb. The album’s closing piece, “Yes, Please Both” manages to reference both a Winnie the Pooh phrase in the title and Ornette Coleman in the sound of the music (with the piano laying out in the introduction, à la Coleman’s classic recordings). Seim explains: “I’ve always been drawn to both free playing as inspired by people like Ornette and this other desire to play simpler, more melodic music.”

Reflecting on his influences, Seim says: “When I was a young boy, my father got me a saxophone, but I was more interested in soccer. Then we went on a long car drive, and he played Jan Garbarek’s ECM album Eventyr. I was so touched by it, just by the sound of Garbarek’s saxophone, that I really became interested in the instrument. Even now, that impression never leaves me. It’s something about the special way he produces his tone, but also the fact that while most players are concerned with how many notes they can play, Garbarek is always telling a story on the saxophone. Ever since, I’ve always been drawn to musicians who tell a story through their instruments. And that’s what I hope to do.”